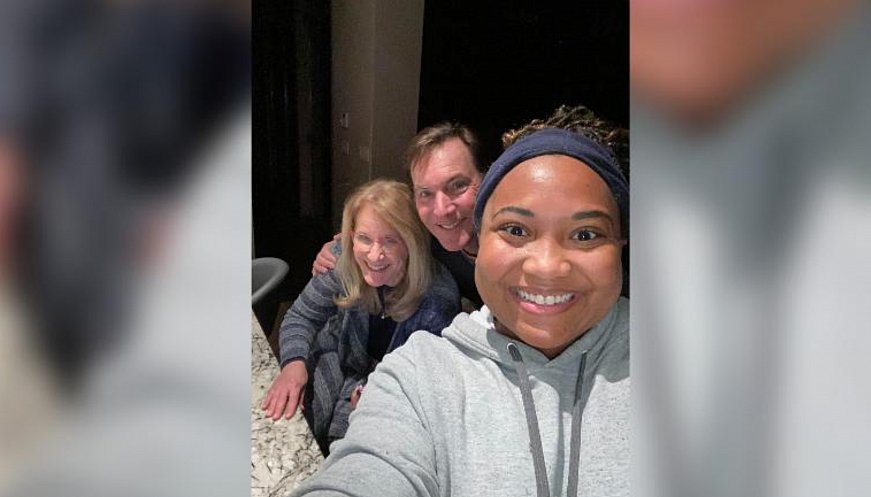 "I was going down very slowly, remembering to tap my brake. I tapped more aggressively and it just still kept sliding," said Chelsea Timmons, 32, describing going down the driveway to her last home of the day as a delivery driver. Timmons closed her eyes, praying not to hit the house, and was thankful the car merely ended up in the flowerbed. Homeowners Doug Condon and Nina Richardson tried to help get her Toyota Rav4 up the driveway, but it was stuck. Timmons planned to wait in her car for a tow truck but, with the stormy weather, the couple, who had received their first Covid-19 vaccine just a week before, invited her to wait inside. "I sat with my mask in their kitchen for about two hours," Timmons recalled. When she got news no tow truck was able to safely make it that day, due to the severe weather, she thought to look for a hotel nearby to stay before her three-hour drive home to Houston. But Condon and Richardson worried like concerned parents about what situation Timmons would find herself in if she ventured out and invited her to stay in their guest room. One night turned into five, and from the unexpected situation blossomed a new friendship. The trio shared meals and conversation, and Timmons made a gourmet coconut cake to thank the couple. "She just became kind of part of the family pretty quickly," explained Richardson. We would hope that if our daughters were in a situation similar to Chelsea's, that there would be someone that would treat them like we treated Chelsea. I don't think we ever thought twice about it," said Condon.