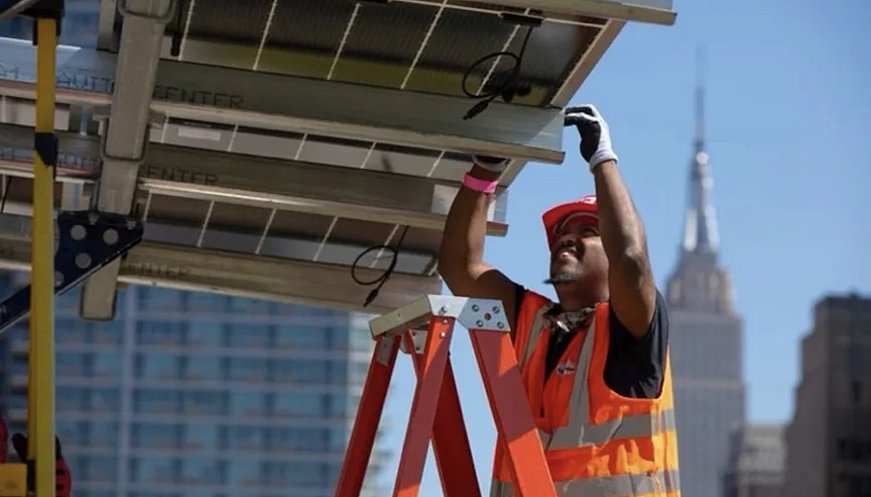 Developers have nearly completed building the largest rooftop solar project in Manhattan, helping New York State move closer to its goal of installing six gigawatts of solar by 2025. The German company Siemens has already installed 1,400 solar panels on top of the Jacob K. Javits Convention Center, as well as a 3.5-megawatt indoor battery system for storing energy that can be used to reduce strain on Manhattan’s electric grid when its demand for power reaches the peak. With great ingenuity, the company overcame a number of challenges when designing and installing the solar panels. For example, it had to work around existing vegetation that helps cool the building and three-dozen HVAC units using a checkerboard layout of solar panels built above each HVAC unit like a canopy. Siemens also used computer simulation to help designers find ways to deal with the problem of shadows casting over the rooftop by future high rises. It is hoped that the Javits Center rooftop solar project will help reduce greenhouse gas emissions from lighting, heating, and cooling of buildings, setting an example for other convention centers and large facilities. This project may also boost Javits Center’s capacity to serve city residents in times of need, as it did at the beginning of the Covid outbreak in 2020 when it became a makeshift field hospital. “In case there’s a brownout in New York City, you can at least run rudimentary services in this building and keep it safe,” says Ruth Gratzke, President of Siemens Smart Infrastructure U.S. “That’s really the driving force behind this.”